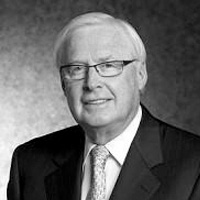 The Honorable Jake Epp served as Chancellor of Tyndale University College & Seminary from 2005 to 2009. Mr. Epp previously had an illustrious career as a politician and a leader in the private and public energy field.

He was first elected to the House of Commons in 1972 as Minister of Indian Affairs and Northern Development. Subsequently, he served as Minister of Energy North of the 60th parallel, Chairman of the Committee on Federal- Provincial Relations, Minister of National Health and Welfare, Minister of Energy and Natural Resources as well as on several cabinet committees including Priorities and Planning, Economic and Trade Policy, Social Policy and Foreign and Defense Policy. In 1993, he was appointed as Senior Vice President of TransCanada Pipelines and President of TransCanada Pipelines International.

Throughout his life, Mr. Epp has been active in his community and has held various leadership positions including President of the Hanover Division Teachers’ Association, Town Councillor and Deputy Mayor of the Town of Steinbach, and board member of Steinbach Bethesda Hospital, Eastern Manitoba Children’s Aid Society, and the China-Alberta Petroleum Centre based in Beijing, China. Over the years, Mr. Epp has been the recipient of several awards including the Manitoba Centennial Medal for service, the Canadian 125 Anniversary Commemorative Medal, and an Honorary Doctor of Law Degree from Trinity Western University for public service and leadership to the Canadian Community. In 2010, Mr. Epp was appointed an Officer of the Order of Canada.