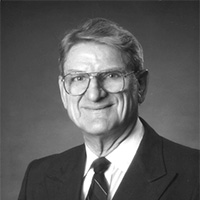 Citing Dr. Tyndale’s godly character and vision, along with his outstanding years of service in Canada and worldwide, school president Brian C. Stiller affirmed the Board of Governor’s unanimous approval of Tyndale’s appointment to this honorary position.

Dr. Tyndale was born in London, United Kingdom and completed studies at Oxford in Russian Language and Literature. He completed his postgraduate work at the University of Toronto and spent a year at Cambridge as Visiting Scholar. A 12-year career in the British army was followed by 24 years of ministry with Inter-Varsity Christian Fellowship of Canada (IVCF). During his time with IVCF, Dr. Tyndale served as teacher, mentor and coach to university students, faculty advisors, and staff.

In the early 80s he developed and led a Lay Training Program at Holy Trinity, Thornhill and then spent 12 years as Executive Director and National Coordinator of the South American Missionary Society, Canada (SAMS).

Dr. Tyndale developed the Extension Programs for Wycliffe College, where he also taught; and that of Trinity Episcopal School for Ministry in Pittsburgh, PA, in partnership with his wife, Penelope Ann. He also consulted to the Toronto Diocese in the development of 'Logos’, a training program for laity.