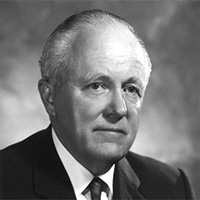 For 39 years, Dr. Stewart Boehmer was associated with Ontario Bible College and was known for his outstanding contribution to its development and growth. He served as a member of the Board of Governors from 1950-1963, and became President of The Toronto Bible College in 1963, after which he faithfully served for more than 11 years, bringing to his position a pastor’s heart, business accumen and a wide reputation in Christian education. Under his leadership, the school experienced an unusual expansion in student registration and curriculum offerings which generated an ongoing growth in the school.

In 1975, the Board of Governors delightedly announced his appointment as the first Chancellor of Ontario Bible College. Dr. Boehmer continued to wear this mantle with dignity and effectiveness until 1989.