Building Bridges among Children with Autism

“Children sometimes bully others due to a lack of understanding,” says Marsha Marzouca [BA Hons. Psychology]. “When we teach [typical children] about autism and how difficult it is for children with autism to make friends, they can then come from a place of understanding and can actually become friends.” 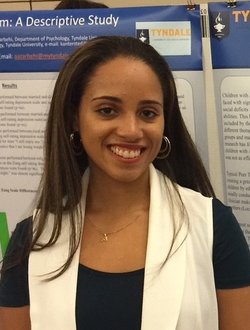 All of Marsha’s research was conducted during the Tyndale Research in Autism and Community Education (TRACE) camp, where she examined which character traits influence a typical child’s ability to interact well with children living with autism. Marsha notes that during the TRACE camp, children displayed an improvement between the first and second weeks of camp after the training was implemented. For her thesis research, Marsha also surveyed parents to examine the specific characteristics such as leadership and good communication skills that influence children to successfully interact with their peers with autism.

Marsha had the rare opportunity to present her undergraduate research findings at the Ontario Association for Behaviour Analysis (ONTABA) conference held in Toronto and at an international conference held in Puerto Rico. ONTABA is a prestigious conference that draws researchers, practitioners and experts from across the province.

Marsha has a passion for improving the lives of children with autism, and one of the primary motivations for her research is an internal one, “I really love working with kids and seeing the different ways to help other children.”