The Tyndale Honorary Doctorate of Divinity recognizes exemplary individuals who have displayed exceptional achievements in their professions, and who have made outstanding contributions to culture and society in Canada or elsewhere in the world. Candidates must demonstrate a depth of Christian character and the foundational virtues that we wish our graduates to strive for. 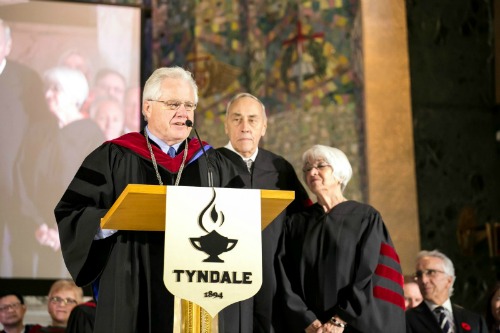 The new Chancellor, Dr. John Wilkinson, presented Honorary Doctorate of Divinity degrees to Ian and Alice Van Norman at the 2015 Fall Convocation. The Van Normans are “a couple who represent these characteristics in the fullest measure,” said Dr. Gary Nelson, President of Tyndale University College & Seminary. “Their lives provide inspiration and leadership to students, to this community and to the community at large.”

Ian and Alice Van Norman were married in 1955. In 1963, Ian and Alice launched a Canadian Tire store in Smiths Falls, Ontario, and so began the Van Norman’s long and highly successful career in business. Through hard work and sacrifice their business grew, as did their family. New and exciting opportunities eventually led to a move from their home and church in Manitoba to Saskatoon, Saskatchewan. They became key players in many Christian initiatives in the city, across the country and around the world.

For over thirty years, the couple have been travelling to Haiti. The Van Normans are invested in the lives of the Haitian people – loving, aiding, and fostering relationships with them. In 2010 they were among the first who responded when the country was hit with a catastrophic 7.0 magnitude earthquake. The Van Norman Charitable Foundation has assisted with reconstruction projects since this time. Their generosity continues to reach those in need, most recently with the construction of a hospital in Burundi named in their honour.

The Van Normans are longtime supporters of Tyndale. Through their generous support, the Van Norman Worship and Study Centre was revitalized in 2004 and the Van Norman Chair of Business was established in the spring of 2011.