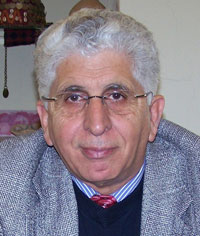 The Rev. Alex Elias Awad is a missionary with the Board of Global Ministries of The United Methodist Church serving in Israel/Palestine with his wife, Brenda. He pastors a small international church in East Jerusalem and teaches courses at Bethlehem Bible College, where he serves as faculty member, dean of students and board member. He says his ministry is unique and varied.
Rev. Awad wsa born and raised in Jerusalem. His formative years were marked by the death of his father, who was killed in 1948 during crossfire between the Israeli and Jordanian armies. After the family became refugees, his mother was faced with the task of raising seven children between the ages of six months and eleven years. She enrolled her older children in local boarding schools, many of which had emerged in response to an increased number of orphaned children who had lost one or both parents in the war. She worked as a nurse to single handedly support the family.
Alex reflects that the silver lining in his family's tragedy was his mother's revived commitment to the Christ she experienced as a young student in a Christian school. As a result Alex says, he was practically 'raised in the church.'