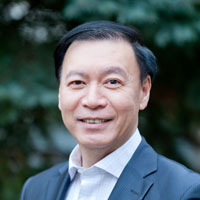 Dr. Ngien has taught at the Toronto School of Theology, McMaster Divinity College and several seminaries abroad. He is the author of The Suffering of God according to Martin Luther's Theologia Crucis (1995; reprint 2003 and 2005); Apologetic for Filioque in Medieval Theology (2005); Luther as a Spiritual Adviser: The Interface of Theology and Piety in Luther's Devotional Writings (2007); A Faith Worth Believing, Living and Commending (2008); Gifted Response: The Triune God as the Causative Agency of our Responsive Worship (2008); and Giving Wings to the Soul (2011). His next book Interpretation of Love -- God's and Ours, is scheduled to be published early 2013. His articles have appeared in journals such as International Journal of Systematic Theology, Scottish Bulletin of Evangelical Theology, Evangelical Review of Theology, Themelios, Heythrop Journal, etc. His article, The God Who suffers, appeared at Christianity Today's 50th anniversary webpage, and is considered as one of the significant works. Founder of Centre for Mentorship and Theological Reflection (dennisngiencentre.ca), he spends time in mentoring scholars, theological students, pastors, church leaders and assisting churches in advisory and teaching capacities. Recently he was nominated as "Research Scholar in Theology" at Blackfriars Hall, Oxford University, where he is on residence at different periods of the academic year.