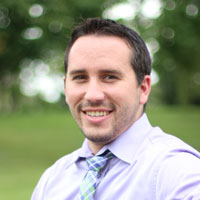 James Brooks has spent his whole life in the GTA. Born in North York and raised north of the city in a small community called Stouffville. James has attended Springvale Baptist Church in Stouffville his whole life, and has also served in many ministry teams at Springvale, in particular with the youth. He attended Stouffville District Secondary School, and upon graduation was admitted to Tyndale University College for the Leading Edge program. It was here he feel in love with the Tyndale community, both his fellow students and also the faculty. He went on to graduate with a BA in History in 2007.

In 2009 after a couple years in the workforce James applied for a position in the Tyndale Admissions office. He worked there for 3 years, recruiting students from York Region, Simcoe County and parts of the United States. Again he fell in love Tyndale and knew that it was an amazing community driven by passion for Christ and education. In 2012 the opportunity came up for James to move to Student Life to take over the position Coordinator, Intercultural Initiatives. He now works in that office helping to coordinate local and global outreach initiatives. James is also currently enrolled in the MTS program at Tyndale Seminary.