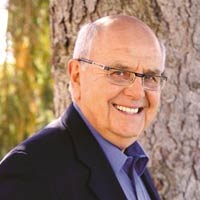 Dr. Paul Magnus, who currently serves as distinguished professor of leadership and management in the seminary, served eight years as Briercrest's president from 1996 to 2004.

Paul has been engaged in leadership roles and leadership instruction within and beyond the Christian higher education community for over four decades. Much of that time was spent at Briercrest College and Seminary, and after his time here, he served in two churches and later as the R.J. Bernardo Family Chair of Leadership at Tyndale Seminary in Toronto. He has also served the Evangelical Fellowship of Canada in various volunteer roles for over 25 years, most recently as the chairman of their board.

He continues to be passionate about leadership, communication, and executive and ministry coaching that equips, empowers, and enables the next generation's leaders for the church and the marketplace.