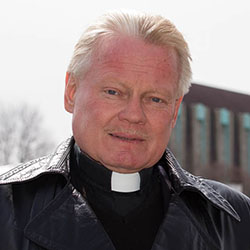 Michael committed to serving God at 18 years of age, but after a trip where he ministered to severely broken and hurting people in inner-city neighbourhoods, he realized he had much to learn. His encounters led him into the field of psychology, law and politics. His foray into this world made him realize that God’s love was ultimately what would bring hope into the most hopeless situations.

At one point, he worked at Christian Horizons helping those with cognitive and physical disabilities. During that time, in 1978, he began to study at Tyndale, then known as Ontario Theological Seminary. Taking courses part-time, he felt led to join the police force, who also helped with the costs of his studies.

Many of the situations he encountered as an officer were difficult and traumatic. One particular incident led to his Post-Traumatic Stress Disorder (PTSD), but it was not recognized as a formal condition at the time and went undiagnosed. He attempted suicide, but God intervened. God knew his pain and led him to remain in the police force another four years until he eventually met Rick Tobias, who was teaching at Tyndale.

Rick inspired him to pursue another path working with street youth. He became the Director of Yonge Street Mission’s Evergreen Centre for Street Youth in Toronto. Michael received the Order of Canada for his work with marginalized youth and had the distinct privilege of having Henri Nouwen as his spiritual director before Nouwen passed away. He learned to meditate on the Lord, and he heard from God in those times. He took what he learned and applied it to the street youth. “It’s important to love them, get to know them, not preach at them,” he notes, and many came to Christ.

“I want to encourage you, whatever else you learn theologically, bring that love of Christ that’s so desperately needed in people’s lives.”