The Path to Advocating for Marginalized Youth 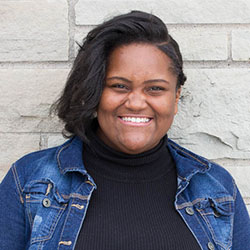 Natasha Daley [BA 2017] recently started her specialized four-year JD/MSW program at the University of Windsor. This unique dual-degree enables her to work towards her Master of Social Work alongside her Law degree concurrently. Her future career options include becoming a lawyer within the child welfare system or the youth criminal justice system.

Studying at Tyndale enabled Natasha to combine her interest in social work, the justice system, and encouraging young people. She’s grateful for the guidance from experienced faculty who helped connect her to the field of criminal law, which influenced her career path significantly.

“Being at Tyndale was really relevant to what I wanted to pursue. The Health and Human Services program (with a minor in Psychology) was perfect for that, especially with the practicum placement,” she shares.

Prior to Natasha's coming to Tyndale, her father lost his job. The resulting loss of income led to financial strain and the loss of her family's home, right in her last phase of high school as she considered post-secondary options. Despite all this, her father encouraged her to have faith and trust in God. He inspired her to follow her heart’s leading, knowing that God would make a way.

When she heard of Tyndale at her high school’s university/college fair, she knew this was her path. Natasha received the President’s Scholarship and bursaries, which helped her financial situation. She also worked part-time and at one point held two jobs during her full-time studies.

Natasha honed her leadership skills through various avenues at Tyndale. She was the McCrae House leader, she initiated the Black Educators of Tyndale (BET) club, which empowers diversity, and also served as the Events and Outreach Coordinator for the Health and Human Services Students Association.

“I’ve grown a lot since I’ve been here. Definitely because of the things I was involved in, I made it a point to not just be a student here. The relationships you build, the impact you might be able to have in the lives of those around you is more important than just getting a good GPA.”