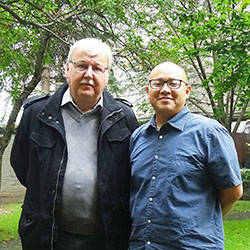 This year, the Tyndale Intercultural Ministries (TIM) Centre celebrates its 20th anniversary. A special event will take place during Homecoming on September 29, and all past students are invited to attend. Dr. Robert Cousins has faithfully served as Director of the TIM Centre since 2005. Three years ago, Dr. Cousins initiated a succession plan, with the goal of appointing a younger leader representing the cultural diversity of Toronto.  After nearly twenty years with the TIM Centre, Dr. Cousins will hand over the management of the Centre but will still continue as a leadership consultant with Tyndale and the TIM Centre. Dr. Cousins will be honoured as one of the Distinguished Alumni at Homecoming.

As a missionary with Africa Inland Mission (AIM), Dr. Cousins was seconded to Tyndale in 1999 by Dr. Irving Whitt – whose leadership vision founded the TIM Centre – within what was then known as the Life Long Learning Centre. Dr. Whitt’s vision was to train people in cross-cultural ministry. At the time, Dr. Cousins was the Director of MissionPrep, a training organization doing exactly what Dr. Whitt was hoping to do at Tyndale. He invited Dr. Cousins to bring the program to the TIM Centre, and Dr. Cousins was seconded from AIM until Dr. Bob Morris’ retirement as Associate Director in 2005.

In 2008, the leadership team of the TIM Centre began to recognize that God was doing something amazing by bringing representatives of the nations of the world to live in the Greater Toronto Area. Given this new reality, the focus of the TIM Centre shifted to being a resource for those who serve the multicultural population within the city. “God has been bringing representatives of nations to our door step,” shares Dr. Cousins. “That has become our niche over the last 10 years.” Since 2008, the TIM Centre’s vision statement has been “The Church from all nations bringing Christ to all nations,” encompassing the reality that mission is no longer one-directional, but, rather, “from everywhere to everywhere, beginning on our door step to the ends of the earth.”

“I would say that the role of the TIM Centre is very strategic today, we are probably on the cutting edge of working with what God is doing with the diaspora in our local ministry context,” notes Dr. Cousins. He believes the reason for the TIM Centre’s success is its flexibility as the lay leadership training branch of Tyndale. “We are able to develop courses and to respond to the needs as we see them within the immigrant community.”

The TIM Centre continues to grow and develop in programs and partnerships that span across the country and even internationally. The Centre also participates in current research to understand our changing times. The Centre is active in examining such issues as the influx of refugee populations and how faith organizations are helping with the settlement of new Canadians. “I think one of the characteristics of the TIM Centre is that it is a learning organization; we have to learn what is going on around us and then, as we learn, try to develop partnerships and responses to meet the needs that we see around us,” says Dr. Cousins.

As Dr. Cousins’ succession plan has been implemented (“I’ve been here 20 years, and I want to have the leadership handed over to a younger leader and someone who has also lived and served as part of a diaspora population.”) Rev. Dr. Timothy Li-Hui Tang will assume leadership of the TIM Centre as the new director as of October 1, 2018. He has been working with the TIM Centre since 2016 as the Associate Director. An emerging, second-generation leader and one of the pastors of East Toronto Chinese Baptist Church, Dr. Tang brings the unique experience of growing up in an immigrant context. We welcome Dr. Tang to his new role as he continues the mission of equipping leaders and churches in an increasingly diverse society.