In 2010, Tyndale Seminary launched a scholarly book series which publishes high quality academic research on Wesleyan themes, with a focus on work by Canadian scholars or on Canadian Wesleyan topics. The series is currently suspended. Questions should be directed to James Pedlar (jpedlar [at] tyndale [dot] ca). 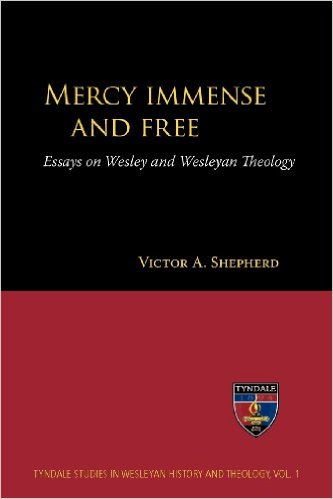 This volume celebrates the Wesleyan scholarship of Victor Shepherd, the first occupant of the Chair of Wesley Studies at Tyndale Seminary in Toronto, Canada. The essays collected here explore not only the life and theology of John and Charles Wesley, but also many themes relating to the contemporary Wesleyan tradition, especially within the Canadian context.  Attention is given to the intellectual, social, and religious context of John Wesley's theology, as well as to the ecumenical significance of a theologian who is seen to relate readily to many different families within the universal church.

Victor A. Shepherd is a Professor of Theology at Tyndale University, where he held the Bastian Chair of Wesley Studies from 1993-2004. He is also an adjunct professor at the Toronto School of Theology, University of Toronto, where he supervises graduate students. His wide-ranging academic publications include The Committed Self: An Introduction to Existentialism for Christians (BPS), Interpreting Martin Luther: An Introduction to His Life and Thought (Regent College Publishing), and The Nature and Function of Faith in the Theology of John Calvin (Mercer University Press).
Howard A. Synder. Yes in Christ: Wesleyan Reflections on Gospel, Mission, and Culture.  Toronto: Clements Academic, 2010. ISBN: 978189466799 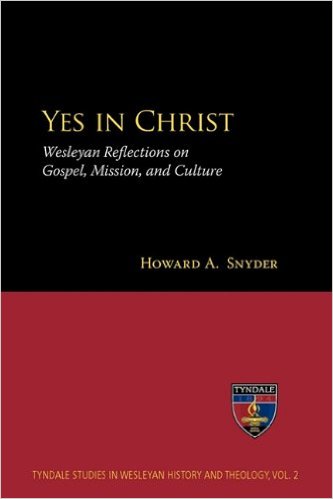 The promises of God formed the basis of John Wesley’s optimism of grace. Wesley believed God not only could but in fact would fulfill all his promises to bring salvation to the nations; to make new heavens and a new earth; to liberate the whole creation from its bondage to decay (Rom. 8:21). This collection of essays by respected Wesleyan theologian Howard A. Snyder reflects the spirit of Wesley’s optimism of grace. The first half of this collection offers an overview of Wesley’s theology and practice, particularly with regard to gospel, mission, and culture. Part Two examines the inter-dynamic between church renewal and global mission. The collection also includes Wesleyan appraisals of Clark Pinnock’s theology and the ecclesiology of Karl Barth.

Howard A. Snyder served as distinguished professor and chair of Wesley Studies at Tyndale Seminary until 2012. Previously, he was professor of history and theology of mission in the E. Stanley Jones School of World Mission and Evangelism at Asbury Theological Seminary in Wilmore, Kentucky from 1996 to 2006. His numerous books include Salvation Means Creation Healed (Cascade), The Radical Wesley (Seedbed), and Populist Saints: B. T. and Ellen Roberts and the Birth of Free Methodism (Eerdmans).
Christopher Payk. Grace First: Christian Mission and Prevenient Grace in John Wesley. Toronto: Clements Academic, 2015. ISBN: 978192679821. 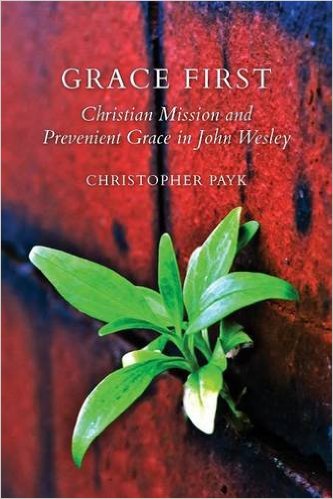 In this thorough and missiologically sensitive study of John Wesley’s theology, Chris Payk explores what John Wesley meant and intended by the term “prevenient grace.” Tracing the antecedents and sources of Wesley’s teaching on prevenient grace more thoroughly than does any prior work, Payk shows that prevenient grace is not a Wesleyan invention; it has long roots in the history of Christian doctrine. However, he also shows that Wesley added nuances and dimensions that have considerable relevance for the church’s life and mission today. Payk then creatively combines his historical-doctrinal analysis with a helpful discussion on how this bears strategically and theologically on the church’s mission in the twenty-first century.

Christopher Payk is an ordained minister with the Free Methodist Church in Canada. He is currently serving on the pastoral team at Mucha Free Methodist Church in Taipei, Taiwan, where he has lived for over five years.
Amy Caswell Bratton. Witnesses of Perfect Love: Narratives of Christian Perfection in Early Methodism. Toronto: Clements Academic, 2014. ISBN: 9781926798301. 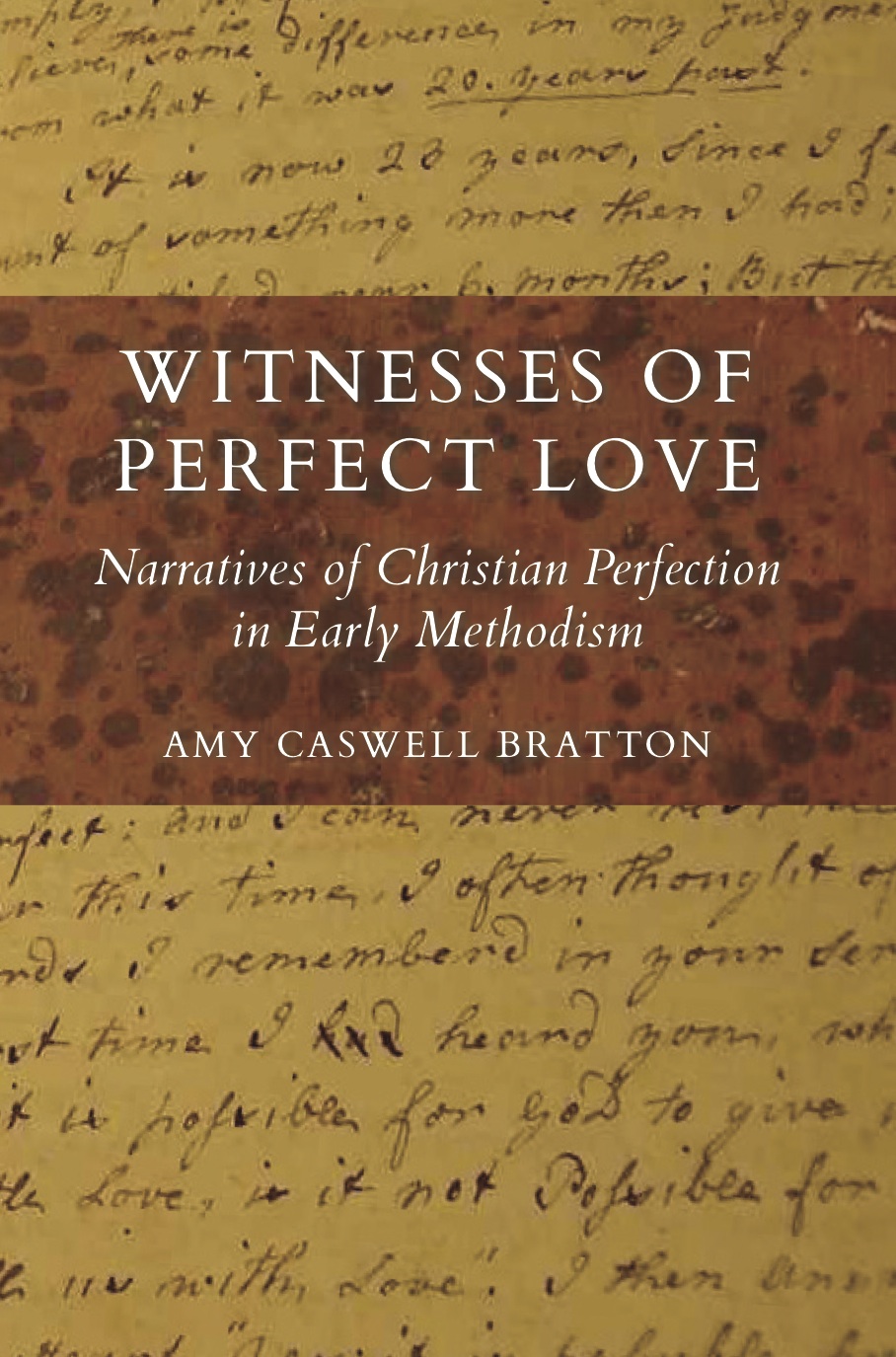 This study is noteworthy for its detailed analysis of several first-hand narratives that testify to the experience, and which were made public for the edification of the Methodist community in the Arminian Magazine and other publications. The narratives of four Methodist people are examined at length: Sarah Crosby (1729—1804), George Clark (1710—1797), William Hunter (1728—1797), and Bathsheba Hall (1745—1780). In addition to observing the transmission of the doctrine through narrative, the study of these stories illuminates early Methodist spirituality and the doctrine of Christian Perfection (or entire sanctification) through the embodiment of Perfection in the life of real people. This lived-out expression of Christian Perfection draws attention to unique elements of the doctrine as each narrative illustrates nuances of Christian Perfection. Finally, the narratives of Perfection offer the embodiment of transformation which resulted in lasting change.

Amy Caswell Bratton was born in Kindersley, Saskatchewan, and has a rich family heritage of Methodism in the Free Methodist Church. She is a graduate of Rocky Mountain College and Regent College, where she completed her MCS and ThM in Spiritual Theology.