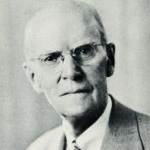 Dr. J. Wilmot Mahood was President of London Bible Institute (Tyndale) from 1935 to 1944. He was born in 1864 in Huron County, Ontario, and was an elementary school teacher in Harriston, Ontario before he began preaching at Methodist churches in the Dundalk, Ontario area. After a pastorate in the United States, he became an evangelist for the Methodist Episcopal denomination. He received his honorary doctorate from the College of the Pacific.

In 1928, Dr. Mahood went to Moody Bible Institute to lead their extension staff team, a position he held until he retired to pastor a church in California. However, he could not forget the challenge of Dr. James M. Gray, the Dean of Moody, to establish a similar institution in southwestern Ontario. In 1935, he founded the London Bible Institute (LBI) and began teaching night classes twice per week in the London Gospel Tabernacle. A year later, full-time classes began. Dr. Mahood remained as President until 1944, when he retired at age 81 to return to California. With the foundation of his leadership, LBI (later London College of Bible and Missions – LCBM) had grown from 100 students in the early 1940s to 200 students by the end of the decade.

Dr. Mahood passed away in 1955 just a few days before his ninety-first birthday, having been married to his wife Marion for nearly 70 years. He was fondly remembered by students and colleagues as a kind and godly gentleman.