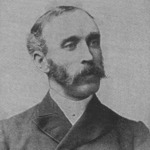 Dr. Elmore Harris was President of Toronto Bible Training School (Tyndale) from 1894 to 1911. He was born in 1855 in Beamsville, Ontario and his father founded A. Harris, Son & Co. Ltd., which is now the major agricultural equipment manufacturer Massey Ferguson Ltd. His grandfathers were pastors, and Dr. Harris followed in their footsteps to pursue pastoral studies, obtaining a Bachelor of Arts degree from the University of Toronto, and a Doctor of Divinity degree from McMaster University.

In 1894, Dr. Harris and a group of lay people from St. Paul’s Anglican, Knox Presbyterian and Walmer Road Baptist founded Toronto Bible Training School (TBTS), in response to the need for a Christian institution in Toronto to educate people for service in lay ministries. Dr. Harris served as the first President of the school, which changed its name to Toronto Bible College (TBC) in 1912. Dr. Harris was considered “a remarkable soul-winner,” and had a strong reputation for his expository preaching. During the years from 1871 to 1895, he baptized an estimated 1,000 believers. Dr. Harris lectured for many years at McMaster, and also served on the leadership boards of McMaster and China Inland Mission-Toronto.

Dr. Harris and his first wife Ruth had five children together, and were married for 33 years until her death in 1910. Dr. Harris married Olive Marion Culham in September of 1911 and he passed away in December of that year.