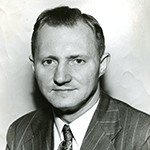 Dr. Joesph Bernard Rhodes was Principal of Toronto Bible College (Tyndale) from 1946 to 1953. He was born to China Inland Mission (CIM) missionary parents and attended a school established by Dr. Hudson Taylor for educating the children of missionaries in Chefoo, China. Dr. Rhodes went on to the University of Toronto, receiving his Philosophy degree with honours in 1925 and his MA degree the following year. He began his theological course at Princeton Seminary for a year, completing his Bachelor of Divinity course at Knox College in Toronto and graduating in 1929, head of his class.

His journey with Toronto Bible College (TBC) began as a part-time lecturer in 1939, and this quickly led to a full-time teaching position. He became Vice Principal in 1943 and then succeeded Dr. McNicol to become Principal of TBC in 1946.

Dr. Rhodes never ceased to be a student. While serving in the ministry, he carried on post-graduate studies. He continued these studies even after becoming Principal of TBC, and in 1949, he received his Doctor of Theology.

His gift of teaching was easily recognized by students, who appreciated his humble spirit as he led them to the profound truths of the Christian faith and a deeper devotion to Christ. His goal was to enable students to become independent, exercising their own judgement and initiative and expressing their own God-given personality and convictions as they served others in the spirit of Christ’s love. He encouraged the spirit of enthusiasm, camaraderie and fellowship. Those who knew him would say that he was never motivated by personal ambition but a desire to obey the Lord and be found in His will. As this was his purpose in life, he encouraged students to make this their purpose as well.

Four years after he became Principal, Dr. Rhodes encountered significant health issues, and he died in July 1953. Despite his failing health, he continued to carry on his duties as principal and lecturer, keeping up with fellowship and student interactions and choosing to live his remaining time fully for the work and service of God.