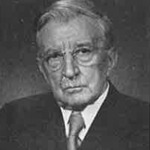 Dr. John McNicol was Principal of Toronto Bible Training School/Toronto Bible College (Tyndale) from 1906 to 1946. He was born in Hanover, Ontario, where his father was a teacher. The family moved to Ottawa, and from there John studied classics at the University of Toronto’s (U of T) University College, graduating with an Honours Bachelor of Arts in 1891. In Toronto, he was very involved with the Student Volunteer Movement, the Elizabeth Street Mission and the YMCA. In 1895, he graduated with a Bachelor of Divinity from U of T’s Knox College, and went on to pastor in the Presbyterian Church in Canada in Alymer, Quebec, before going to Toronto Bible College (TBC) in 1902 to teach English Bible.

In 1906, he became Principal of Toronto Bible Training School, and remained in that post until 1946 (he continued teaching at Toronto Bible College until 1954). In addition to being a talented teacher, he was also a gifted administrator, and steadily guided the institution so that the influence of the school kept pace with its increased enrolment and building expansion projects. His greatest purpose, however, was to shape the character and strengthen spiritual leadership of the student body, and the students deeply appreciated his support and wisdom. The John McNicol Memorial Library commemorates his faithful legacy.

Dr. McNicol was a board member for many Christian organizations, including Sudan Interior Mission, the China Inland Mission and the Upper Canada Tract Society. He attended the 1910 Edinburgh Missionary Conference as one of the Canadian delegates. In 1935, he received an honorary Doctor of Divinity degree from Knox College. He was a prolific author of many articles, monographs and the popular four-volume work, Thinking Through the Bible. His most popular article was “Fundamental But Not Dispensational.”

His wife, Louisa, was affectionately known as the “College Mother” and was his partner in ministry. She and Dr. McNicol were married for 54 years, and he dedicated Thinking Through the Bible to her.