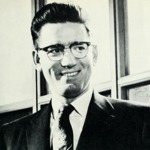 As President of LCBM, Dr. Gannett oversaw the school become an associate member in the Accrediting Association of Bible Institutes and Bible Colleges; the introduction of a college-level program; the enlargement of the Stewardship Fellowship Plan for giving, and the establishment of a men’s dormitory.

Because of his gifts for teaching, preaching and administration, Dr. Gannett’s life was a rich blessing in every realm of school life. This made him a highly sought after preacher and speaker in Canada and the United States.

Dr. Gannett was the husband of Georgetta, and father to four children, Keith, Ronald, Mary-Lynn and Stevie. He passed away on September 23, 2001 at the age of 80.