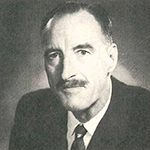 Rev. E. L. Simmonds was Principal of Toronto Bible College (Tyndale) from 1954 to 1962. He came to Canada in 1930 from his native England to train for ministry. He earned his Bachelor of Arts at the University of Toronto in 1937. He went on to complete his Master of Arts and attended Wycliffe College to earn his Bachelor of Divinity degree in 1940.

He served for fifteen years in various roles in southern Ontario as a minister of the Anglican Church. He taught for a year at TBC as a part-time faculty member before taking on a full-time position in 1954 teaching homiletics and pastoral theology. In the same year, he was appointed principal of Toronto Bible College (TBC), succeeding the late Rev. J. B. Rhodes.

With spiritual vision, insight and a thorough understanding of TBC, Rev. Simmonds was part of many initiatives that shaped the next chapter of the institution, including TBC’s earning the ability to officially grant degrees.

Rev. Simmonds challenged his students to come face to face with a personal God – to discover what they believe and to express their faith clearly. His office was constantly alive with students as they came to seek his advice on various topics. He imparted the foundation of the Bible as a living book to his students, preparing them for effective ministry.

In his own words, TBC’s mandate, which still resonates with Tyndale University, is this: “The world today is in need: no one would think of denying that fact. The great need is for leaders. The function of Toronto Bible College is, by the grace of God, to help provide God-called, God-directed leaders, men and women who know God through Christ in personal experience and who, therefore, can show others the way.”

Rev. Simmonds stepped down from his position as principal in 1962 for health reasons. Several months later, he returned to teaching as chair of the Biblical Studies department. He retired from teaching in 1979.