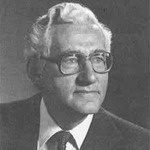 Dr. Victor Adrian became President of Ontario Bible College/Ontario Theological Seminary (Tyndale) from 1973 to 1983. As President, he presided over two highly significant milestones in the school’s history: the establishment of Ontario Theological Seminary (now Tyndale Seminary) and the move to the campus at 25 Ballyconnor Court, Toronto, both in 1976.

Before coming to Ontario Bible College/Ontario Theological Seminary (OBC/OTS), Dr. Adrian was the President of Mennonite Brethren Bible College in Winnipeg, Manitoba, where he also served as a lecturer from 1967 to 1972. After his time at OBC/OTS, he served as the General Secretary of Mennonite Brethren Missions Services from 1983 to 1992. There, his role involved helping develop theological perspectives of emerging churches overseas and coming alongside missionaries in church planting efforts in countries across the world. He was also a member of the Council of the Evangelical Fellowship of Canada and participated in the Congress of World Evangelization.

Dr. Adrian is the author of the book Committed to World Mission: Focus on International Strategy (Kindred Press, 1990), as well as numerous journal articles, chapters and academic papers. He and his wife, Helen, had four sons, Wesley, Timothy, Mark and Matthew, and one daughter, Elaine.