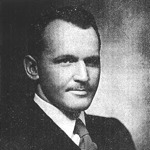 Dr. James Bedford was President of London Bible Institute/London College of Bible and Missions (Tyndale) from 1945 to 1954. He was first educated at Moody Bible Institute in 1932. After Moody, he received a Bachelor of Arts degree at Houghton College in 1936, a Bachelor of Divinity degree from Eastern Baptist Theological Seminary in 1939, and received an Honorary Doctor of Divinity degree from Houghton College in 1952.

Over the nine years of his presidency at London Bible Institute/London College of Bible and Missions, Dr. Bedford oversaw the relocation of the school to 518 Queens Avenue; the official granting of theological degrees by the Ontario government, the renaming of London Bible Institute (LBI) to London College of Bible and Missions (LCBM), and the expansion of campus facilities to 486 Queens Avenue. He was responsible for securing prominent chapel speakers at the school such as Dr. John Stott and A.W. Tozer.

After his time at LCBM, Dr. Bedford was called to the pastorate at Beulah Baptist Church in Detroit, Michigan, where he also secured a teaching position at Detroit Bible College. Later on in the 1950s, Dr. Bedford served as President of Buffalo Bible College for five years.

Dr. Bedford was the husband of Janet Bedford, and the father of two daughters, Donna Lee and Ruth.