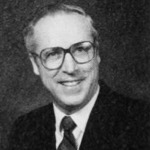 Dr. William McRae was President of Ontario Bible College/Ontario Theological Seminary (Tyndale) from 1983 to 1991. While President, he taught in the Pastoral Theology department and the Biblical Studies department.

A former school teacher, Dr. McRae taught in the public school system for two years. From 1966 to 1975, he was involved in pastoral and Bible teaching ministries at Believers Chapel in Dallas, Texas and also in Canada in Renfrew, Ontario and London, Ontario.

From 1990 to 2000, he was the Chairman of the Evangelical Fellowship of Canada’s Vision 2000 evangelism committee. For several years he taught annually at the Billy Graham Schools of Evangelism.

His books include: Preparing for your Marriage (Zondervan, 1980), Dynamics of Spiritual Gifts (Zondervan, 1983) and A Book to Die For (Clements Publishing, 2002).

Dr. McRae and his wife Marilyn have four married children and 13 grandchildren.