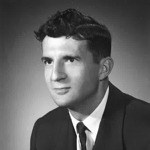 Dr. Percy Harris was President of London College of Bible and Missions (Tyndale) from 1958 to 1959. A native of Forest, Ontario and a Second World War veteran, he served as a bombardier in the Royal Canadian Air Force. During the war he was shot down over Germany and taken prisoner. When he was finally released, he returned to Canada for his studies. Dr. Harris earned a Bachelor of Arts degree from The University of Western Ontario in 1946, a Master of Theology from Dallas Theological Seminary in 1951, and a Doctor of Ministry degree from the same school in 1958.

Prior to his positions at LCBM, he served as an assistant pastor for two years at Central Baptist Church. While at LCBM, Dr. Harris served as an instructor of Old Testament, the Dean of Faculty, and finally as President. During his short term of office, LCBM received its accreditation, something Dr. Harris worked hard to accomplish as President. Dr. Harris’ life influenced every area of LCBM’s ministry, not only in London, but in its outreach to the broader community. Under his leadership, LCBM became known as a school of high academic and spiritual standards.

Dr. Harris passed away on November 2, 1959 of polio at the age of 37. It is said that Dr. Harris received the joyful news of the school’s accreditation as he lay paralyzed in an iron lung shortly before his death. He was remembered by many as a great man of God and a scholar “who showed Christ in all things.”