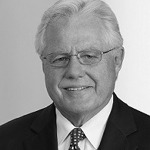 Dr. Brian Stiller was President of Ontario Bible College/Ontario Theological Seminary/Tyndale University College & Seminary from 1996 to 2009. Since 2009, he has served as President of the Tyndale Foundation, led a capital campaign raising $44 million for the purchase of a new campus, raised $8 million for endowed chairs and is now President Emeritus of Tyndale.

Dr. Stiller was raised in a minister’s home on the prairies. Educated at the University of Toronto (Bachelor of Arts in History), Wycliffe College (Master of Religion), and Gordon-Conwell Theological Seminary (Doctor of Ministry), he has received honorary doctorates from Briercrest Bible College and Seminary and Trinity Western University.

From 1983 to 1996, his leadership as President of the Evangelical Fellowship of Canada gave him a national profile as a voice for people of biblical faith. Through his ministry, he helped move the evangelical community into the mainstream sphere of influence and commentary.

As of July 1, 2011, Dr. Stiller has served as Global Ambassador for the World Evangelical Alliance, a global ministry which works with local churches throughout the world to proclaim the Good News of Jesus and serve more than 600 million evangelical Christians and their communities.

Dr. Stiller and his wife Lily have two children, Murray and Muriel, and five grandchildren.