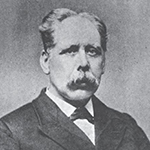 Dr. William Boyd Stewart holds the honour of being the first Principal of the Toronto Bible Training School (Tyndale) founded in 1894.

Born in Scotland, Dr. Stewart completed his degree at the University of Glasgow in 1856 and then later emigrated to Canada, where he served as a Baptist pastor. His career shifted between pastoring and teaching in various locales within Ontario, as well as teaching high school and serving as a principal at a bible college in the US before becoming principal of the Toronto Bible Training School. He also earned his Doctor of Divinity degree within this time frame. Due to declining health, He moved from this position to that of the Office of Secretary in 1906, retiring from this role in 1911. He passed away shortly thereafter in March 1912.

As the first Principal, he was pivotal in shaping the course of instruction of the Toronto Bible Training School and guided its development as many men and women were commissioned to global mission work and local service. Near the end of his time as principal, the school was renamed as Toronto Bible College to more accurately reflect the broader teaching available to all in receiving Biblical education for service in any field.

He reflected in one of his letters about his experience working with students: “It has been a great joy to me to gather with these earnest young Christians around the Word of God day by day, in honest, patient and prayerful study. Surely there can be no greater work than that of training these young minds in the knowledge of God’s Word and the ability to use it in Christ’s cause so that in the power of the Spirit they may go forth from the School, as scores have already done, to fields of labour at home and abroad and seek to win souls for the Saviour.”

In his time as principal, he witnessed the early stages of what was possible in Christian Higher Education – beginning with a class of 12 students in the inaugural year and later the numbers ballooning to more than a thousand coming through those halls and embarking upon different fields of ministry.