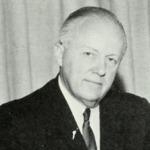 Dr. Stewart Boehmer was President Toronto Bible College/Ontario Bible College (Tyndale) from 1963 to 1973. He was born in 1907 in Kitchener, Ontario, and attended Benton Street Baptist Church with his family while growing up. He graduated from Moody Bible Institute in 1933, and his first pastorate was at First Baptist Church in Waterloo, Ontario. In 1943, he accepted an invitation to be the pastor of St. John’s Evangelical Church (later Calvary Church) in Toronto, Ontario, leading the church through a major building project and growing their missions and Sunday School ministries.

He was a great supporter of missions work and Christian education. He was the first chairman of the Canadian Council of the Africa Inland Mission from 1952-1965  and supported the Pocket Testament League, along with many other missionary efforts. In 1955, he received an honorary Doctor of Christian Education from Wheaton College.

Dr. Boehmer and his wife, Evelyn, had two sons, Fred and Jim, and many grandchildren and great-grandchildren. Dr. Boehmer is warmly remembered for his pastor’s heart, business expertise enthusiastic spirit of goodwill and generous hospitality. The Dr. Stewart Boehmer Scholarship commemorates his outstanding legacy of leadership.