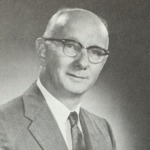 Dr. Joseph C. Macaulay was President of London College of Bible and Missions (Tyndale) from 1960 to 1966. He was born in Scotland, and immigrated to Canada with his parents when he was a teenager.

Dr. Macaulay had a long history of experience as an evangelist, pastor, musician, hymn writer and teacher. He was the pastor of Wheaton Bible Church in Wheaton, Illinois, where he ministered to Wheaton College professors for 15 years and received an honorary Doctor of Divinity. After his time in Wheaton, Dr. Macaulay served as professor of Systematic Theology at Moody Bible Institute in Chicago for nine years. In 1960, he became President of London College of Bible and Missions (LCBM) and would continue in that role for six years.

While President, Dr. Macaulay led the school through many opportunities and challenges. He was a “tower of strength” for the LCBM community, which came through in his prayer life, expository preaching and hymn writing.

Dr. Macaulay’s hymn Thyself was played at his memorial service on September 13, 1981 in New York City.