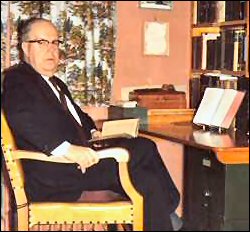 Percival J. Baldwin (1907-1975) was a senior executive in a major Canadian manufacturing corporation located in Toronto. He was raised in the Calvinistic Baptist tradition and developed an early interest in theology and an insatiable appetite for the writings of the Puritans. During the years after World War II he assembled a 2,000 volume Puritan studies collection, including the original editions donated to Tyndale University.

We are very grateful to his daughter Audrie and her husband Bruce Cossar for their generous donation of this collection, which was given to the J. William Horsey Library in 1988.

This 203 volume collection consists primarily of works by the Puritans and their contemporaries, with most of the titles being published between 1625-1700. There are a few titles published before 1600, the earliest being a copy of the "Geneva Bible" printed in 1576. There are also a few works published after 1700. Among the most significant authors represented in the collection are James Durham, John Owen, William Perkins and Samuel Rutherford. A portion of this collection is listed in the Short-Title Catalogue of [Rare] Books, edited by Donald Wing of Yale University. This catalogue is a standard reference work for those seeking to locate copies of items published between 1641 and 1700.

The collection is significant because it represents the Puritan tradition, which has a great deal to say to the modern church. The Puritans had a deep awareness of who God is, what He has done for us and how we ought to live in light of this. As the church seeks to minister to people in the twenty-first century, we will be in a much stronger position to do so if we take the time to listen to, and learn from, these godly people of the seventeenth century.

Those wishing to use the collection should fill out a request at the Library’s Circulation Desk and a Library Staff member will retrieve the requested item for use in the library.